In light of the recent jingoism of the Pluto fly-by (which I had hoped we were bigger than — after all, what looks sillier than those getting the first view of our furthest “planet” standing around waving US flags?) it’s a good time to remember the wording of that plaque we left behind on all our Apollo missions: 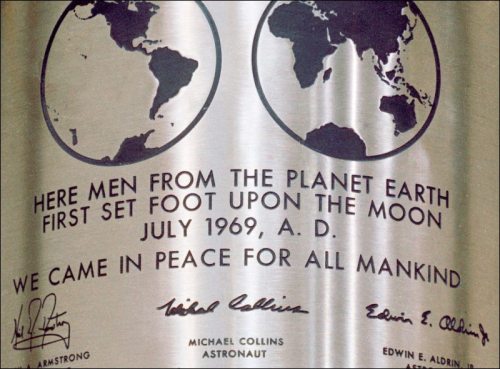 “We came in peace for all mankind.”

The Apollo missions taught us that we were all spacemen huddled together on that one small blue marble whirling in the Stygian void of space.

I have written about this “holiday” every year since at least 2006. You can find previous columns at The Moderate Voice, and at The Democratic Daily.  They make the case for this (obvious) holiday, and remind us of what a feat we take for granted.

No long sermon here. We still come in peace for all mankind, and I don’t remember us taking it back. Here’s the NASA Administrator on Pluto:

“The exploration of Pluto and its moons by New Horizons represents the capstone event to 50 years of planetary exploration by NASA and the United States,” said NASA Administrator Charles Bolden. “Once again we have achieved a historic first. The United States is the first nation to reach Pluto, and with this mission has completed the initial survey of our solar system, a remarkable accomplishment that no other nation can match.”

Happy Moon Day, my friends. For our species and our planet.

I love my country, but this will stand far longer than any nation or flag.

We still come in peace for all mankind.

Or, you might enjoy the original post from 2005:  Moon Day or, A Secret History of Neil Armstrong

Comments Off on Happy Moon Day!