The Fix Is In

I am not prone to conspiracy theories — even though I uncovered at least one national conspiracy.  I have seen enough of the world to know that, while small men have their delusions of grandeur and of being the captains of everyone’s soul, the force of history — for want of a better term — has ideas of its own and always wins an arm-wrestling match, no matter how drunk you get it or how you might try to cheat it. Which is the only notion here that gives me hope. 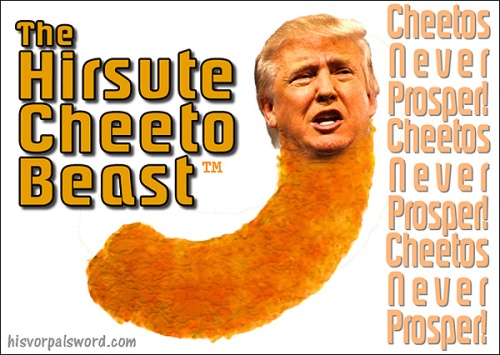 But look at what the “news” is at the top of Memeorandum as I speak:

Donald Trump has made it clear he will nominate Peter Thiel to the Supreme Court if he wins the presidency, Thiel has told friends, according to a source close to the PayPal co-founder. Trump “deeply loves Peter Thiel,” and people in the real estate mogul’s inner circle are talking about Thiel as a Supreme Court nominee, a separate source close to Trump told The Huffington Post. That source, who has not spoken to Trump directly about Thiel being nominated to the Court, cautioned that Trump’s offers often fail to materialize in real life…

This notion is absurd, is not going to pass muster in Congress and serious adults would relegate it to the “joke” section of any news reporting. Instead, it dominates the “news” today. Why?

Because there is a media conspiracy to elect Donald Trump, whether intentional or not. And it scares hell out of me. 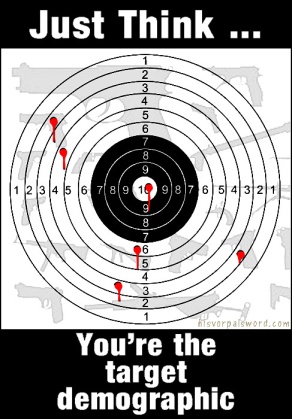 This idiotic proposal wouldn’t make it halfway up the flagpole, let alone be saluted, but this is what the press corpse is obsessed with and blithering about. Why, it’s almost somewhere near “real news” in the same way that unicorns are somewhere near real horses. And it isn’t an outlier, it’s symptomatic.

Case in point, for the umpteenth time, I awaken, turn on MSNBC to maybe get some news (before dialing up the dull but NEWS version of France 24 that I time-shift from Link TV). And, for the umpteenth time, the Hirsute Cheeto Beast™ is holding forth as he always does, blathering as ever, some “policy” speech on taxes, that, as a tax professional, I find insulting, stupid and specious as hell. Whether this is from ignorance or intent, I cannot tell, but the track record strongly suggests the former.

And I switch to CNN. Same speech, live. To Faux, ditto.  This scenario has replayed itself continuously: Trump opens his cake hole, all three cable news channels carry it like it was the frigging State of the Union speech and then empty talking heads spout statistics about Trump’s lag in fundraising and advertising buys.

And never notice that he doesn’t need it. He’s being aided and abetted by a quisling media and given all the free air time he wants.

Why should he raise money to advertise on TV when he gets far more free coverage than anyone could reasonably buy?

And then, after showering, etc., I come back to the TV and Andrea Mitchell is asking a Clinton campaign “strategist” about Hillary’s HEALTH.

It is a paradox.

(See “How To Walk A Conspiracy Theory into the Mainstream 101” for details.)

Which is, if you think about it, precisely the coverage Trump would WANT about Mrs. Clinton.

So, don’t pretend the fix isn’t in.

We are neatly separated from actual news by a clickbait media who grovel at the feet of Trump ratings. That’s the charitable version.

How else do we describe the apotheosis of the Poster Boy for the One Percent? 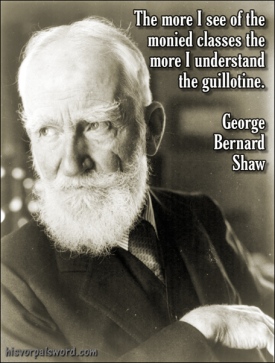 At that point, we swing into conspiracy, because there is no other reasonable explanation for the utterly asymmetric coverage of the Hirsute Cheeto Beast™ that ISN’T a conspiracy by the One Percent-owned media and the One Percent Flim-Flam Man.

And, in the horrifically evolving combination of an incompetent and unprofessional press and an increasingly imperious candidate class, the old “people’s right to know” is summarily tossed on the trash heap and access is granted only for the most self-serving of means. Donald Trump has yet to answer a single substantive question about his candidacy, and THAT is the fault of a cowed and castrated press corpse. 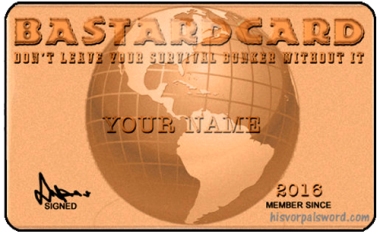 A free pass on press coverage

Not a SINGLE. SUBSTANTIVE. QUESTION.

You say you’re a ‘ successful’ businessman. Can you  substantiate that with your tax returns? As American political candidates have done for nearly 50 years and which YOU criticized Mitt Romney for not releasing in 2012?

You say you’re going to fix [INSERT ISSUE HERE]. How?

You showed up in Flint, Michigan yesterday for a photo-op without informing city officials until the last moment and created chaos in your wake. What would you actually DO about the Flint lead crisis?  Did you know that there’s a bill in Congress that would fix it RIGHT NOW? Would you be willing to talk to Speaker Paul Ryan and Senate Majority Leader Mitch O’Connell and ask them to act on it BEFORE the election? Right now?

Of course THOSE QUESTIONS ARE NO LONGER BEING ASKED!

But we can stop all news for a three-network simulcast of more hot air from the Hirsute Cheeto Beast™. 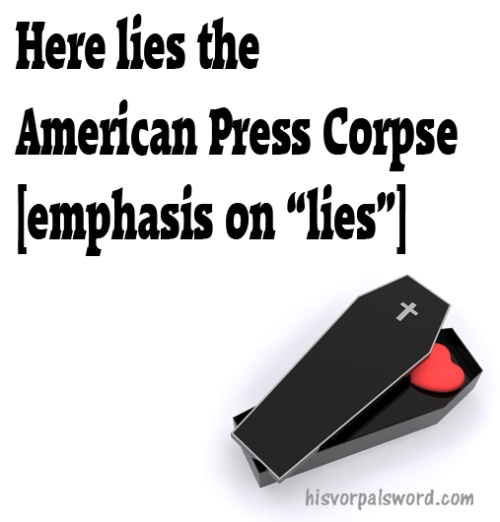 The fix is in.

Don’t you doubt it. 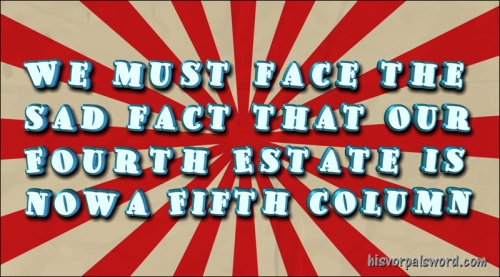 One response to “The Fix Is In”