How the Democrats can Exploit the Rout 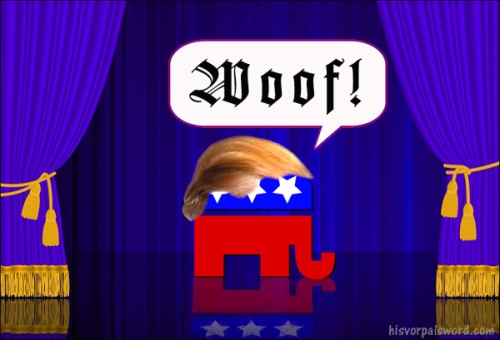 Here’s an interesting bit of news that hasn’t been seen since Teddy Roosevelt seceded from the GOP and ended up electing Woodrow Wilson, the Republican party is in utter disarray:

This is the moment in human conflict where a huge disparity arises and a rare opportunity presents itself.

Civilization is a team sport. And within that team sport, in a democratic (i.e. ultimate power is dependent upon the vote, usually with a constitution or charter guaranteeing various rights NOT subject to the whim of the most recent election) contest, several teams vie for the ultimate prize of the right to govern, just as, in war, teams would vie using bullets rather than ballots.

In war, when one team loses its cohesion — its identity, its collective sense as a team, its esprit de corps — it is called a “rout.”

This is the moment when one relentlessly pursues one’s shattered enemy and cuts them to pieces — in war, that is.  Something essential has vanished from the equation, and the “team” is far superior to the former team opposing, now composed almost entirely of individuals.

[* WHAT has actually vanished is a bit of an epistemological mystery, BTW. If you have ever been in a stadium where the audience does the ‘wave’ you have seen it IN the wave. Even better if you have participated. You stand up at a certain moment as the ‘wave’ comes around. But you are the same, and the rest of the audience is the same, and the ‘wave’ phenomenon only exists as a result of a small effort on the part of each audience member, seemingly discretely. You can see the same thing in the swarming of birds.

The ‘wave’ as seen in birds.

What is that? It is more than a random collection of individuals, but less than the symbiotic collection of billions of cells that constitute each “individual.” The birds can unswarm, the fish unschool and the ‘wave’ vanish in the stadium crowd. But SOMETHING was there. What was it?  It is not a simple question, although it seems that way. ]

After the rout of the Confederate army at Chattanooga, Tennessee in 1864, the generals who understood war were understandably angry at the commanders who decided that, having won, they ought to give their troops a rest, rather than pursuing the fleeing former army and capturing or killing as many as possible. They knew that shattered armies can reform.  The opportunity was lost and yes, those formerly routed Rebels DID reform and many a rested Union ass that day got shot off on another as a result of NOT pursuing the shattered enemy. The ROUTED enemy.

In other words, the Republican “army” is losing its cohesion, its ‘wave’ no longer coherent, and, increasingly:

The GOP tumbles toward anarchy: ‘It’s every person for himself or herself’
Philip Rucker / Washington Post

Politically correct language rather ruins the impact of the cry of rout: “Every man for himself!” conveys the notion far better than the impossibly freighted down with its own pretension at Perfect Justice:  ‘It’s every person for himself or herself!’

And the Democratic party needs to ACT like a party if the advantage is to be pressed. 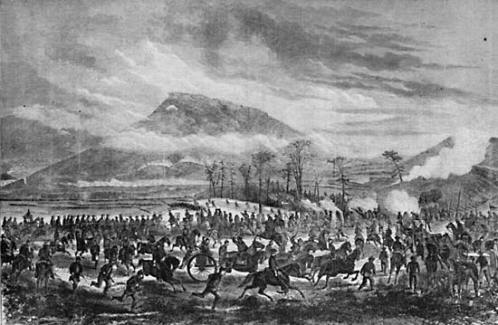 The Battle of Lookout Mountain (1864)

At this point in the “war rooms” of the Democratic party, the rout needs to be taken advantage of. The need to pull together as a team is matched with a political opportunity that comes, perhaps, once in a century.

I have worried that while Donald Trump’s clown car has caught fire and shot over the railing of the ocean cliff road that no one remembers the Koch “union” of skeevy billionaires has been spending their billion-dollar war chest buying the congress and legislatures of these  formerly United, now wholly-owned, subsidiary States. 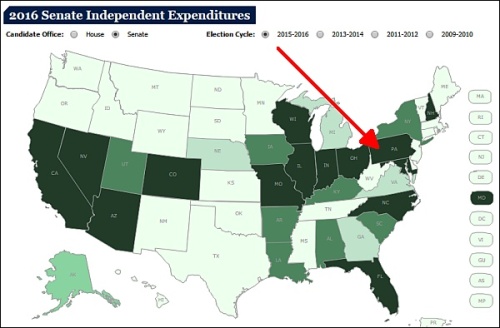 If you go to the Pennsylvania  on the FEC’s  2016 Senate Independent Expenditure Map, and click on ‘Pennsylvania’ you will immediately enter topsy-turvyland: the committees are “opposed” to a senate candidate, but it’s only the Pat “I Used to be President of the Club for Growth” Toomey versus MCGINTY, KATHLEEN ALANA senate race. 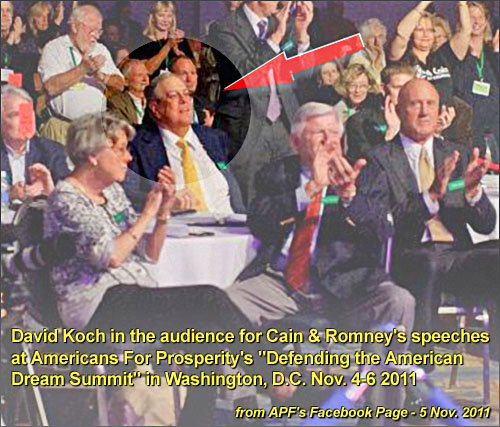 The first few anti-Toomey expenditures are from union organizations, which is to be expected. But then AMERICANS FOR PROSPERITY for several pages. Who is AFP?

Americans for Prosperity generally refers to the organization’s section 501(c)(4) “social welfare” branch, generally referred to as a “dark money” group because it does not have to disclose its donors, despite spending millions to influence elections.  […]

AFP was one of the lead organizations behind the Tax Day Tea Party protests April 15, 2009. Its Director is Art Pope, an ex-legislator who has been dubbed “The Knight of the Right” by Raleigh News and Observerjournalist Rob Christensen. In mid-2009, Americans for Prosperity launched an advertising and advocacy campaign opposing U.S. health care reform named Patients United Now. On its website it describes its “featured partners” as being the Heartland Institute’s International Conference on Climate Change, the Internet Freedom Coalition and Townhall.com.

According to investigative journalist Jane Mayer in an article in the August 30, 2010 issue of The New Yorker, the Kochs are known for “creating slippery organizations with generic-sounding names,” that “make it difficult to ascertain the extent of their influence in Washington.”

And now, David Koch’s “little engine that could” is micromanaging an “opposition” campaign. Here’s one page of MANY (figures are from that page):

There’s David Koch’s most public political face micromanaging the campaign from staff salaries ($10,555.30 Staff Salaries) to canvassing (going door-to-door: $2,465.52 Canvassing Expenses) to making phone calls ($782.86 Phone Banking) and even printing door hangers ($2,487.00 Door Hangers). And those aren’t totals. They’re line items, repeated endlessly over page after page after page of AFP’s campaign against Pat Toomey’s opponent. There is a profound connection between the Kochs and Club for Growth (Pat Toomey’s gig before he successfully ran for Senate on the Tea Party wave, significantly WITHOUT presenting himself as a “tea partier.”

And that’s just ONE race. Now, multiply by a billion dollars.

[On that same map, go to New Hampshire’s Senate race and find “John Bolton’s Super PAC“expenditures for Kelly Ayotte (currently on page 8)  — which sounds like the WORST DC comic title ever — and know that nearly all its funding comes from Robert Mercer, the computerized stock trader who famously interfered in my Oregon Congressman Peter DeFazio’s race a few years back, who has become a real sugar-daddy for GOP candidates, and Ted Cruz’s biggest supporter.]

This is the opportunity for the Democratic PARTY to pivot and remind voters that it is the DO NOTHING Republican Congress since 2010 that is behind voter rage.

If they want to move the country they need not only the White House but ALSO the Congress. And while approval of Congress is below 20% (sometimes below 10%), incumbent congresscritters are re-elected over 90% of the time (ironically, the focus of the Koch Brothers’ initiative to establish term limits throughout the USA). 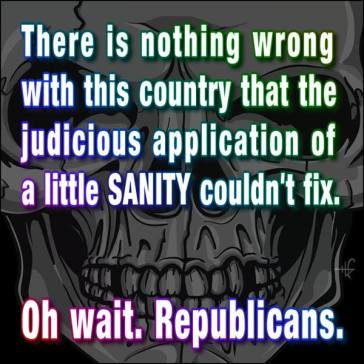 If the Democrats want a Democratic Congress, they need to run against the CURRENT Congress, and AS A WHOLE. Not piecemeal, district by district. The NATIONAL party needs to remind voters that only by voting the Republicans out can Congress move forward with Veterans’ benefits, with climate change amelioration initiatives, with rebuilding roads, bridges and other infrastructure (can’t build when taxes can’t be raised and the GOP is in thrall to Grover “I am a moron” Norquist’s soul-stealing pledge “I will never raise any taxes on anything ever.”

You can’t do that at the local level.

A party not content to rest on their posteriors would make that plea, cut those commercials, take advantage of this rout. And to let the American voter choose between an independent party and a stealth campaign by plutocrats to buy one party and control the US government.  (The had no fewer than five candidates in the GOP field this year, and two out of the last three standing).

Would make the plea to disaffected Nader/Stein Bernie supporters: vote who you want in the presidential, but vote BLUE down ballot. That is the ONLY way to move your policy agenda forward.

A Democratic congress is a possibility. A Green congress an impossibility. Grab those votes. Get the Republican protest votes.

PRESS YOUR ADVANTAGE. Cut down the routed troops as they flee.  Far better to do it in the relatively polite world of electioneering and ballots than to allow this insane polarization to continue to the literal battlefield.

But these are Democrats, and we recall Will Rogers.

I am not a member of any organized political party. I am a Democrat.

4 responses to “How the Democrats can Exploit the Rout”