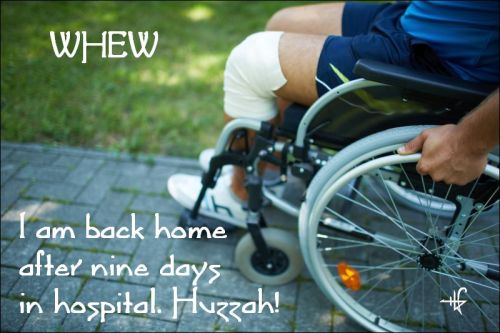 On November 4th, at 6 AM, my old friend cellulitis made a surprise visit, as I suddenly began to get chills that seemed more like I was on an arctic expedition with only a sheet, than my warm bedroom with a nice blanket. I immediately ran to the medicine cabinet and took the antibiotics that I have on hand for just such an emergency. Got under the blankets and rode out the teeth-chattering chills. A few later, the fever broke and I had to swap out my entirely soaked t-shirt for a dry one. Kept up my regimen all day Friday and Saturday. It didn’t get worse; but it didn’t get better, either.

By Sunday morning, I was all but out of meds, and only UrgentCare was open for business. I went there. I was sent to the Sacred Heart Emergency Room.  They started hitting me with three IV antibiotic shots. Six hours later, they found a hospital bed, and I was checked into Sacred Heart Riverbend hospital, and while they were checking me into my room, I told them I couldn’t breathe. This had only started during our trip to San Diego. I feared that there was something horribly wrong with my lungs.

One chest x-ray later, I found out that I had an undiagnosed heart issue. They transferred me to the cardio floor.

Had it not been for Obamacare, at that moment, my family would have been bankrupted. Just remember that.

And so, I, longtime political blogger was found isolated in a hospital room without internet access (or much more than basic cable) on the Sunday, Monday and Tuesday of the election. I could only watch.

What I had feared was coming to pass: I had often wondered why no one ever questioned the 2014 election, where everything came in “too good to be true” for Republican candidates. At the house and senate levels, they weren’t just winning MOST of the close races, they were winning ALL of the close races.

Having witnessed the shady double-dealings of the GOPs in 2000 and 2004, I’d thought at the time: This may well be the trial run for a machine to steal the 2016 election.

What I saw on that Tuesday confirmed my worst fears in spades. Every “predicted” (by the outliers of the Trump campaign ONLY) state was a “tossup.”

When you stop to consider that losing just ONE “battleground” state was “GAME OVER” for the Trumpsters, the “miracle” fell more and more into the category I like to call “too good to be true,” as in “if it seems too goo to be true, it probably isn’t. True, that is.”

I have too long a track record of pattern recognition and spotting things long before anyone else to give you further “evidence.” I saw what I saw.

To the point that at an early hour, I turned it off in disgust. It was like watching a boxer take a dive, or a completely questionable “foul” that draws the flag that changes the outcome of the game: that famous moment in the 90s when the officials moved Florida the length of the football field in the closing seconds of the national championship game so that they could defeat Nebraska, who had just, seemingly, won the game with a late score.

Later, as I slept fitfully, my inner “alarm” went off and I woke up, sat straight up and turned on CNN: the chyron at the bottom announced the “election” of Donald Trump.

Sure: either every political professional in America (including pundits, pollsters and analysts using separate metrics) was completely wrong, or else something else happened.

Thence, I had a week to analyze what I saw and what to do about it without ANY external input.*

[* Sad to say that when I came back, the various responses to this were as nonsensical as they were predictable. Mostly, with Democrats and Progressives, rather than blaming the monstrousness of the vile Republicans, they have engaged in savage navel-gazing, blaming themselves for the the theft of THEIR votes. Democrats are usually too scared to fight Republicans. They might get called bad names and cry.]

But if you’ve followed the festival of mendacity since 2000, you’ve watched as polls and then specifically EXIT polls have been discredited as election results have varied wildly from predictive models.

Of  course you could buy the endless post-facto rationalizations that this or that was missed, etcetera, etcetera. Why you’d think that political prognosticators in America were worthless stumble-bums who are all lucky to be able to figure out which end of the milk carton to open on a good day.

But even the senate races were going “too good to be true” save for the lagniappe of Tammy Duckworth in Illinois. But that was, just like Minnesota, the race tossed in just so it wouldn’t look TOO perfect.

And so I began to comprehend the enormity of the crime — Hillary just went up by over a million votes today, BTW:

—  Hillary Clinton’s lead in the popular vote over President-elect Donald Trump has surpassed 1 million, according to Dave Wasserman of the nonpartisan Cook Political Report.  —  As the final vote counts continue to trickle in a week after Election Day …

You see, this wasn’t SUPPOSED to be stolen for Trump. It was supposed to be Marco Rubio or Jeb Bush or some “respectable” Republican, but it ended up Trump — because there was too much at stake to let Hillary win.

And then I thought about how “dangerous” my truth was: IF, in fact, the election was clearly stolen (even though the Democratic candidate had now won the popular vote in seven of the last eight elections), despite massive attempts at voter manipulation, intimidation, suppression and a collaborating US Supreme Court more than happy to gut the voting rights act, questionable voting machines, etc. etc. etc. it has become taboo to suggest that the party openly trying to keep “those people” from voting might be cheating. Massively.

Nosirree. Instead, we take Occam’s Razor and attempt to slit the throats of our pollsters and analysts, suggesting (as did several morons on Election eve) that this was a big a debacle for them as the Dewey-Truman contest of 1948. Right: and the glitches with ENIAC (first “modern” computer, announced in 1946)  are JUST THE SAME AS the glitches in a Windows 10 computer of 2016 using a seventh generation chip.

Occam’s razor suggests that the most elegant solution is the correct one: and given the expertise of our political predictors and EXIT polling SINCE 1948, the conclusion that no one wants to hear is that a very sophisticated mechanism has been put in place to throw elections and hold the minority party in perpetual power.

But the stampede of rationalization has continued apace since November 8, and I do not expect it to stop. The theft must be normalized, else the consequences are too grave to bear: a nation divided, with a fundamental breach in the social contract, the Constitution hijacked, the nation’s future stolen by the same greedy, grasping hands that have allowed our nation to rot and our people to spoil just so that more and more of the common wealth can flow into the few pockets.

No, this is a fundamental crisis, else we go the way of Roman democracy: the Republic ended just as Augustus announced its “restoration.” They kept the FORMS, but within a couple of generations, no one batted an eye at Caligula or Nero, because the notion of democracy was then understood to be quaint. Caligula even got in on the fun by making his favorite horse a senator.

The problem with all analysis I’ve seen since is this: GIGO. In assuming that the election was on the up and up, the fault lies with Hillary, with the DNC, with pollsters and pundits. With not being Bernie enough. With not “appealing” to those mythic lunch-bucket Democrats that mysteriously appeared in lemming-like numbers to throw each and every election the right way.

And the pundits of America do their very best imitation of a teenage girl sitting in a dark closet ritually cutting herself.

Both are equally neurotic, but the teenage girl can get professional help. (Not so with our innumerable pandita.)

Having identified MY truth, I move to the second phase: so what do you do?

Lincoln and I would agree on this, probably. He saw that the Constitution was the enabling document (the SECOND) for our Prime Directive, contained not in the Constitution but in the Declaration:

… Governments are instituted among Men, deriving their just powers from the consent of the governed — That whenever any Form of Government becomes destructive of these ends, it is the Right of the People to alter or to abolish it, and to institute new Government, laying its foundation on such principles and organizing its powers in such form, as to them shall seem most likely to effect their Safety and Happiness. Prudence, indeed, will dictate that Governments long established should not be changed for light and transient causes; and accordingly all experience hath shewn that mankind are more disposed to suffer, while evils are sufferable than to right themselves by abolishing the forms to which they are accustomed. But when a long train of abuses and usurpations, pursuing invariably the same Object evinces a design to reduce them under absolute Despotism, it is their right, it is their duty, to throw off such Government, and to provide new Guards for their future security.

Having stolen the just consent of the governed (along with the Constitution itself), it seems incumbent that we resist.

it is their right, it is their duty, to throw off such Government, and to provide new Guards for their future security.

The choice is yours. You can die on your feet or live on your knees.

As for me, I choose feet.

This does not mean running into the streets with a gun, but, FIRST, that I dishonor their “election” and reject their “candidate” based on the GOP example since 1992, never letting Bill Clinton actually take office, never allowing Barack Obama to actually govern. Now we are suffused with the old BS that we have to give the Usurpers a “fair shot.” Bull. This is the rationalization of the quisling, the creed of the collaborator. We are a house divided. We might as well recognize it and move on. They attempt to steal our country. I believe that they have, instead, purchased their own grave.

This is the reason for the protests: a fundamental, inarticulate understanding of the horrific magnitude of a crime that no one dares name.

I am at home, recovering from a literal broken heart. But don’t waste your compassion on me. Weep for your country.

Oh: And what did I do NOT watching TV for a week?

I re-read The Personal Memoirs of Ulysses S. Grant. It was the right book to read.

One response to “The Gory Details”